On Sunday, August 26, RMM visited the Minnesota State Fair for the fourth year in a row. We asked visitors to let us know what their greatest medical concern was for the future and where they would prioritize awarding research funds. The result?

In three hours, we spoke to 167 people, so only a minute representation of people at the Fair and Minnesotans in general. However, it did show us some things we did not know.

The number one concern was with brain disorders (nearly one third of our visitors reported this as their primary concern), followed by heart disorders and joint disorders. A full table is shown at the bottom.

Thanks to everyone who participated!! 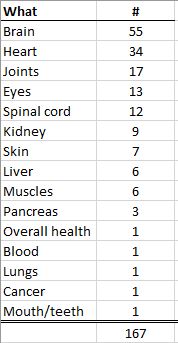